GSO: The Enigma of Grieg


Piano Concerto in A Minor 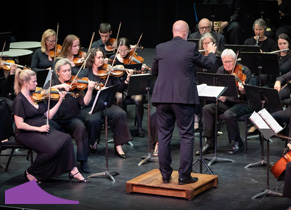 “Something might be made of it" and with these immortal words one of the most admired and acclaimed pieces of music began.

Edward Elgar, whilst playing the piano one night after a day of teaching stumbled upon the thematic idea of his most famous piece the Enigma Variations. He started to play the theme in variations saying to his wife Alice; "Powell (Variation II) would do this", or "Nevison (Variation XII) would do it like this".

Elgar himself describes it as being "commenced in a spirit of humour and continued deep seriousness" and he proceeded to compose fourteen variations of the theme all dedicated to his friends and of course Alice, his wife.

Much has been made about the Enigma but Elgar wrote “the enigma I will not explain—its ‘dark saying’ must be left unguessed, and I warn you that the apparent connection between the variations and the theme is often of the slightest texture; further, through and over the whole set another and larger theme ‘goes', but is not played—so the principal theme never appears...”

Many have pondered what the Enigma is, however what isn’t in dispute is that the Enigma Variations is a classical music masterpiece.

Edvard Grieg had beginner’s luck with his A Minor Piano Concerto. Written when the composer was 25, it is one of the most performed piano concertos in the repertoire, along with the Peer Gynt Suites, Grieg’s most popular work.

Grieg later created two suites from his Peer Gynt music, some of which has received coverage in popular culture.