Back to events
Comedy Drama 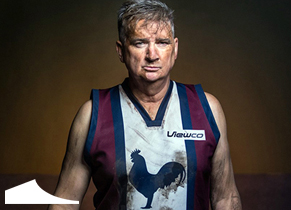 The Merger tells the tale of the Bodgy Creek Football Club and coach Troy Carrington, whose battling team seems destined to either fold or merge with their arch rivals. Callinan effortlessly fluctuates between characters crossing age, gender and ethnicity as Coach Carrington’s mission unfolds: to recruit asylum seekers and save his team, unwittingly taking the community on a journey of change.

“Turning The Merger into a film has been the highlight of my career, but I still love performing the solo version,” says Callinan. “Since the adaptation I’ve had people shaking their heads in wonderment about how that story could possibly be told by one man on a near empty stage. I look forward to them nodding and saying, ‘oh, that’s how - with sock puppets!’ ”