Back to events
Physical Theatre, Drama 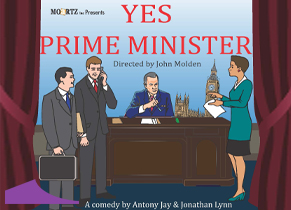 You have seen the TV Series now come along and see it done better in a live performance!

The UK is in crisis: debt is spiralling, unemployment is on the rise and the fragile coalition cabinet, led by Prime Minister Jim Hacker, is at breaking point. But salvation may exist in the form of a complex pipeline deal with the oil-rich country of Kumranistan that would entitle the government to a multi-trillion pound loan. When the Kumranistan Foreign Secretary makes a shocking request of Jim’s Private Secretary Bernard Woolley, moral considerations collide with the economic future of the nation. But how will Jim and his team: Bernard, Cabinet Secretary Sir Humphrey Appleby, and Special Adviser Claire Sutton, reconcile the two? Political machinations, media manipulation and an appeal for divine intervention ensue.