Back to events
Family/Children 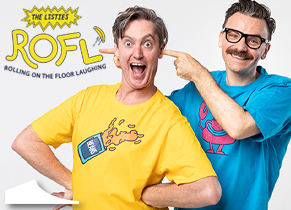 "Does it have a burpershop quartet?” Yes, yes it does.

“Does the show feature the world’s most annoying song?” Totes!

“Is there a mini panto fairy tale called ‘Jack and the Beans-Talk’ about a boy who eats magic beans and farts himself into space?” YES I MEAN WHAT SHOW DOESN’T HAVE THAT?

“Will I roll on the floor laughing so hard a little bit of wee comes out?” Yes, yes you will… you should probably bring a towel.

Gratuitous, ridiculous, hilarious, joyous and possibly hazardous, Rich and Matt are The Listies, Australia’s maestros of kidult comedy, a multi-award winning duo who win over everyone who comes to see them with their insane, interactive, illogical and irreverent escapades.

ROFL (Rolling On the Floor Laughing) is the freshest double act sketch comedy in kid’s entertainment. It’s all of the most popular bits of The LIsties’ sell-out shows jampacked with a brand new set of hilarious comedy routines that will have the whole family in stitches.