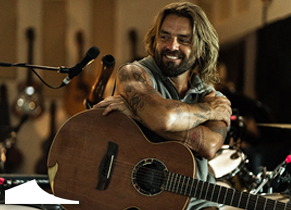 Xavier Rudd announces his 2022 Australian tour, in celebration of the release of his forthcoming 10th studio album ‘Jan Juc Moon’, out on 25 March.

The wind blows strong through Xavier Rudd's tenth album. It’s a recurring image that speaks of wide-open space and the awesome natural elements that shape it: a force far greater than us, but ours to harness if we take the time to learn, reflect and respect its ways.

"It hit me last year when I started to write Stoney Creek," the Australian roots journeyman says of the album's first, exhilarating single: a rolling acoustic balm of a song that finds refuge in the simple blessings of rest, companionship and belonging in a world gone crazy."

"We were on a trip north to the Cape and the wind was blowing too hard to take the tinnie out to the island. As I contemplated everything in my life and what was happening in the world, there was a strong southeaster blowing all the time. It felt like a wind of change, literally, in so many ways."

The wide-open space he'd found himself in — the great COVID silence — was both beyond his control and curiously in-sync. The break accelerated a return to the solo mode of creation that first led the barefoot multi-instrumentalist on his phenomenal journey.

“I’m very excited to get out on the road and share this new record and live show that I’ve been working on. Australia first, and then back out in the big wide world; the world needs music and I’m ready to share.”

Joining Xavier for the full national tour will be support act Marlon x Rulla a dynamic First Nations duo who burst onto the scence in 2020 performing on some of the nation's biggest stages - opening for Midnight Oil at WOMADelaide, rocking Bass in the Grass in Darwin, Party in the Apocalypse in Tassie and wowing 30,000 fans at the AFL'S Sir Douglas Nicholls round. It's no surprise given their energetic live show, that Rolling Stones have said "the group not only cemented themselves as one of the most monumental names on the bill for the evening, but set themselves aside as a pair of artists that you not only should, but undoubtedly need, to pay attention to as their career continues to rise."

Duration: 3 hours, including a support act and a 20 minute interval